How does one define a hipster? Is there even such a thing? Is it a style of dress, a hairstyle? an attitude? Skinny jeans and gauged ears? Plastic framed glasses? As sometimes happens, fashions from the scene have begun to blend into the mainstream, and so we’ve all become a little more hipster. And yet, there is still such a thing as a hipster. An ur-hipster, if you will. The eternal hipster. Hipsters are like pornography: It’s hard to define, but you know it when you see it.

God knows, it’s fun to hate on the hipsters. And there are some people who make it awfully easy. I suppose it doesn’t matter which scene you’re dealing with, there are those who take it too far. Try taking a walk down the streets of downtown Portland, Oregon sometime, and see if you don’t at least once roll your eyes and say, “Oh my god, look at that hipster.” But then, drive out of the city a little bit and you’ll be rolling your eyes and saying, “Oh my god, look at that redneck.” Wherever you go, there’s always that guy.

So yeah, it’s easy to make fun of the guy opening an artisanal cheese shop. The thing is, it’s damned good cheese.

Does Portland (and most other cities) have lots of hipsters? Yes. Are some of them insufferably douchey? Yes indeed. But you know what else Portland has lots of? Fun bars. Great coffee. Microbrews. Bands. Bakeries. Restaurants. Free concerts. Farmer’s markets. And it’s all because of the hipsters.

I suppose it’s a double edged sword. The tragically hip fashion victims get annoying, as does the attitude from the hipper-than-thou girl in the plastic framed eyeglasses at the used bookstore. But the good things and the bad things spring from the same root, the same youthful energy and creative spirit.

It’s important to realize that it’s not about the fashion. Every subculture has its fashions, and many of them look pretty goofy to outsiders, but that’s just a look. People have been coming up with weird fashions since the beginning of time. Beyond the sea-captain beards and the ironic tee shirts, you’ll find people who are trying to do something new. Who are trying to create the world they want to live in. People who’d rather take the considerable risk of opening a coffee shop or a gluten-free bakery or a microbrewery than have a normal job with a suit and tie, and they’re making the world a better place for it. Because, dammit, I like good coffee and unique microbrews and fresh baked goods. If you think these people are doing it to get rich, you must be high. Probably on legal Oregonian weed.

There’s definitely some similarities to the hippie movement of the sixties and seventies. Then as now, you had a subculture of people saying, I don’t agree with the current system, it has nothing to offer me, and so I’m going to stop chasing the carrot on the stick, and I’m going to create my own system. And frankly, they’re doing a better job than the hippies did. When you see somebody riding their bike to their coffee shop, buying locally sourced organic vegetables, teaching free yoga in the park, they’re living with the courage of their convictions, and still managing to more or less live as functional members of society. 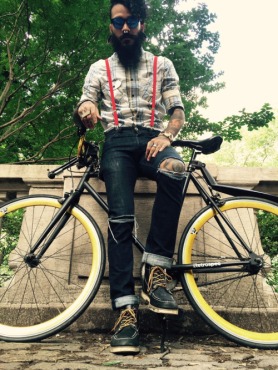 Again, it’s fun to make fun. Like artisanal pencil sharpening. It’s clever, yes. It’s all in good fun. But when we make fun of somebody for, oh, lets say, opening an artisanal cheese shop, what we’re really saying is, “Look at this jerk, trying to make a living doing something he’s passionate about. Who does he think he is, trying to master a craft, trying to share his passion with the world, trying to make himself a life he enjoys. Doesn’t he know that the world doesn’t work that way? Go get yourself a meaningless job you hate like the rest of us miserable assholes.”

So, maybe my resistance to this scene, my brain’s former refusal to open up and try to understand what these folks are doing, what they’re really about, is the first step of my descent into fossilhood, and the next thing I know I’ll be sitting on my front porch with my pants up to my armpits, yelling at kids to get off my lawn.

And frankly, that scares the hell out of me. So, yeah, I think I’ll just lighten up and enjoy the microbrews and the coffee and the music.