There’s something about low-budget dystopian sci-fi from the eighties and nineties…I don’t know if I can explain it. It’s just so…exuberantly bad. No computer graphics, no fancy set design, just a bunch of weirdos who somehow got access to a budget, and went running amok in the desert with a few old cars and gallons of fake blood. Horrible, yet innovative practical effects. Props made from spray-painted thrift store finds. Terrible dialogue. Worse acting. Bitchin’ synthesizer soundtracks. I love ’em. I’m not sure what that says about me, but there it is. 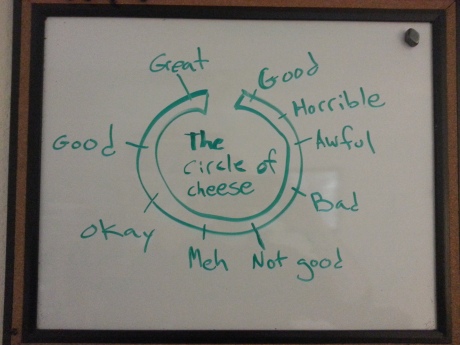 Now I’m not saying these movies are good. They didn’t get robbed of an Oscar or anything. They ain’t Children of Men. If you’ll care to look to your right, you’ll see Matt Kincade’s Circle of Cheese™, illustrating that movie quality is in fact more circular than linear. If it gets bad enough, it gets good again. Crazy, counter-intuitive, but true. Because I said it’s true. And I think I know what I’m talking about.

Buckaroo Banzai, Mad Max, Escape from New York, some of these are pretty well known. But there are a few gems that seem to have slipped through the cracks.

These are a few of my favorite video-store finds, from back in the days before Netflix, when your parents wouldn’t pay extra for cable so you had four channels to choose from, and KTVU played The Road Warrior or Robocop like every other week which was cool, but still… if you wanted to see something different, you had to go on down to Blockbuster. And honestly, for being usurious corporate robots, they still had some pretty weird, obscure stuff.

Most of these you can find on the internet, whether on Netflix, for free on YouTube, or off the pirate bay. I don’t know, google it. Most of these are more fun if you’re slightly inebriated on your intoxicant of choice.

Okay, maybe Rowdy Roddy Piper did deserve an oscar for this one. I have to hand it to the man, he knew how to pick his roles.

In the post-atomic future, fertile men and women are few and far between. Also, there are frog mutants. The frog mutants kidnap some fertile women. The government or whatever kidnaps Roddy Piper because his seed is strong and he can make babies. But then they decide to make him wear an explosive chastity belt so they can control him, and send him to rescue the fertile women from the frog mutants in Frogtown.

Bubble gum is chewed. Mutant frog-ass is kicked. Women are fertilized. Rowdy Roddy Piper spits out cheesy one liners, just like he was born to do. It’s good fun.

Okay, so the United States got nuked in the fifties. The government has collapsed. The country is now ruled by Elvis, who is literally the King. His throne in Lost Vegas is under constant siege by Soviet Russian soldiers, but he still holds out.

When King Elvis dies, the call is put out over the radio waves. Vegas needs a new king. Hopeful musicians travel from far and wide to try and claim the throne.

Enter Buddy. A loner. A drifter. A rock-and-roller. A samurai. He kicks ass all the way across the post-apocalyptic wasteland that is America, fighting off everyone from a bowling-themed gang to soviet soldiers, picking up a kid along the way.

It has been suggested to me that elements of Buddy have bled into my subconscious and manifested themselves in my fiction. This is of course crazy talk.

And now, for a change, a touching romance. In a gritty dystopian future, one man will travel to the ragged ends of the earth, risking his life to find…replacement parts for his sex robot.

Yes, that’s right. Sam Treadwell had the perfect lover. Cherry, a sex robot that was just right for him. She was everything a real woman could be…except waterproof. When they try to do it on a wet floor, everything goes wrong.

He’s got her memory chip, but her body is, well, it’s screwed. Unfortunately, she’s a vintage model. The only place to find a Cherry anymore is in Zone 7, a lawless stretch of desert ruled by 1980’s post-apocalypse gangs.

Sam hires Edith, a real girl, as his guide in the Zone. Along the way, romance develops, complicating Sam’s plan to get his sex robot running again. We’ve all been there.

Will Sam fix Cherry? Will he be unfaithful to his love robot? Will he find true love with a real woman? Frankly, I don’t remember. I haven’t seen this movie in ten years, and I didn’t read the end of the wikipedia article. But I do remember that this is a surprisingly fun, terrible movie.

3 thoughts on “I Love a Good Apocalypse: Three Movies so Bad, They’re Good”