You gotta respect the classics. And you gotta respect free books. Back in the olden days, you’d go to the library for free books. But now, you can go to your kindle. One of my favorite things about kindle, and other ebook platforms, is the absolute mountain of classic books, now in the public domain, that you can find for free. Try Sherlock Holmes, anything by Robert Louis Stevenson, Mark Twain… There’s a lot of good reading out there that won’t cost you a penny. For the sake of my sanity, I’ve kept this listicle down to just ten books, focusing on the classic action adventure novels that I loved as a kid. Many of these authors are the founders of the sci-fi, adventure, and fantasy genres we still love today.

Language is a strange and fascinating thing, and our brains are remarkably adaptable. While the writing style of some of these books is frustratingly old fashioned, if you stick with it you’d be amazed at how quickly your brain picks up and adjusts to the rhythms and the cadences of older writing. Pretty soon, you’ll be flying through the pages like you were reading the latest Lee Child thriller.

Sometimes, reading these old books, you’ll come across a trope that seems a bit worn out to modern readers. But you have to remember, these folks invented those tropes. We are all standing on the shoulders of giants, and these guys are the giants. Not all the giants, mind you. Just the ones whose works are in the public domain 🙂 So, without further ado, here’s ten great classics you can read for free.

Twenty Thousand Leagues Under the Sea 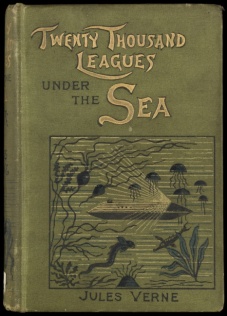 This is a story that everyone is familiar with. How could you not be, given all the various movie adaptations, from Disney’s classic version, to the somewhat regrettable League of Extraordinary Gentleman adaptation. (The original League comics by Alan Moore are not in the least regrettable, and I cannot recommend them highly enough.) Jules Verne more or less invented hard sci-fi. His depiction of the Nautilus accurately predicted technical details of submarines decades before the first submarine was ever launched.

I’m sure you know the basics of the story. After their ship is attacked and sunk, three men are captured by the enigmatic, brooding Nemo, captain of the Nautilus. They are at first enthralled by the man and his undersea kingdom, and accompany him on a variety of fantastic underwater adventures. Later, they’re appalled by his cruelty and obsession, and plot to escape. You can find a better plot summary online. Or you can just download the book. It’s free. What have you got to lose?

The Island of Doctor Moreau

H.G. Wells, most well known for The War of the Worlds, also wrote this little gem, which he described as “An excercise in youthful blasphemy.” This is definitely science-fiction, but of a far darker, more organic stripe than Jules Verne or any journey to the moon. In a way, it could be considered one of the progenitors of modern horror. Or shifter erotica. No, just kidding about that last one. But you can find shades of this work in everything from The Fly to Human Centipede.

The story begins with the Englishman Edward Prendrick, being shipwrecked upon a mysterious island owned by the equally mysterious Dr. Moreau. Prendrick, as Moreau’s grudging guest, slowly discovers that the doctor is performing grotesque experiments, creating bizarre human-animal hybrids which populate his island and revere the doctor as a cruel god. As sometimes happens, things fall apart. The island devolves into chaos and bloodshed, bringing up questions of the very nature of humanity, and mankind’s own inner animal.

A Princess of Mars

This book right here. Another grand-daddy of sci-fi. While Verne and Wells were the progenitors of hard sci-fi and speculative fiction, Burroughs was more on the soft side of the spectrum. More Star Wars than Star Trek, if you will.

The story begins with John Carter, an American civil war veteran who is mysteriously transported to Mars, known to the locals as Barsoom. Which, as it turns out, has breathable air. Since the gravity of Barsoom is so much lower, Earth-man Carter basically has superpowers, being able to jump incredible distances and possessing great strength.

Carter is immediately captured by giant, green skinned, four armed nomadic tribesman known as Tharks. As soon as he gets that mess untangled, he falls for Deja Thoris, a princess of Red Mars. He gets himself mixed up in Martian politics, where his super powers make him a force to be reckoned with. This goes on for several novels.

This story was recently made into the movie John Carter, which was actually pretty good in my opinion, and didn’t deserve the trashing it got.

This book is in my list of my top ten favorite books ever. I was lucky enough to have parents dedicated to exposing their kids to great literature, and so I had this book read to me when I was barely old enough to read myself. I read it myself many more times after that, poring over the beautiful illustrations by NC Wyeth, drawing maps of mysterious islands, playing pirate with sticks instead of swords, climbing trees as if they were the masts of a sailing ship. Oh, how many times did I utter the words, “One more step, Mr. Hands, and I’ll blow your brains out.”

I put this one away, along with childish things, for quite some time. Imagine my joy and surprise when I picked it up again, as an adult, and found that it had lost none of its thrills. I love this book. 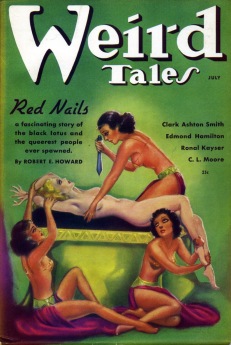 I felt like Robert E. Howard really deserved to be on this list, But apparently very little of his work is in the public domain. This little gem of a novella, starring Conan the Barbarian, is one of the only free works of his that I could find. While you might have to pay for most of them, Howard’s original stories of Conan the Barbarian and Solomon Kane are wonderful. They hold up beautifully even after all these years. I’m especially fond of Solomon Kane, the wandering puritan demon slayer.

This is golden age adventure fiction at it’s best. Originally published as a serial in Weird Tales Magazine in 1936, it’s the story of Conan, written years before Arnold Schwarzenegger was even born.

It’s classic Conan fare. Conan and his companion Valeria, after escaping from some dinosaurs in the jungle, find a mysterious and apparently abandoned city. They investigate and find that it isn’t abandoned at all. Adventures ensue. Conan goes all barbarian on people. Howard’s no frills, spare, exacting prose is a pleasure to read. Give it a try. 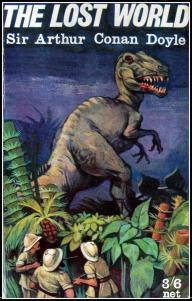 Here is another book that you doubtless know the plot to, whether or not you’ve ever read the book. The great granddaddy of every giant monster movie from King Kong to Jurassic Park, this one was written by Sir Arthur Conan Doyle, best known for the Sherlock Holmes mysteries.

The newspaper reporter Edward Malone tags along on an expedition organized by the zoologist Professor Challenger. In the grand Victorian tradition, they trek to a plateau in the heart of the Amazon rain forest, where it is rumored that dinosaurs still walk the earth. The plateau and the dinosaurs both exist. But after an act of treachery, the expedition is trapped on the plateau, and must fend for themselves while they discover the secrets of the strange land. They encounter iguanadons, pterodactyls, primitive ape-men, and the native human inhabitants of the island in their fight to survive.

At this point I have to give a shoutout to Dinosaur Summer by Greg Bear, a modern book written as a sequel to The Lost World. It’s pretty great, as is everything by Greg Bear.

You may have noticed that there’s a lot of Robert Louis Stevenson on this list. There’s a reason for that. His stuff is all really good.

This lesser-known cousin of Treasure island is, in my opinion, every bit as good. It takes place during the war of the roses, where young Dick Shelton seeks justice for the murder of his father, falls in with outlaws, finds love, and has a whole boatload of medieval swashbuckling adventure.

The plot is rather complex, and I don’t want to get into it too deeply. But it’s a great adventure. The dialogue is faithfully medieval, and can be challenging at first. But stick with it, and it gets much easier. By the end of the book your own inner monologue will be saying things like, “By my troth.”

The Odyssey is the Mitochondrial Eve of adventure fiction and sci-fi. In fact, it’s the second oldest extant work of western literature. This is a story that you’re familiar with, whether you know it or not. This story, along with The Illiad, is matched only by perhaps the Bible and the works of Shakespeare in its influence on western civilization. Its plot, its themes, its characters, are echoed again and again and again, in art, in literature, in movies. And rightly so. It is a heck of a story. I could write an entire blog post about my beliefs in the cultural underpinnings of story, but I’ll suffice to say: If you live in the western hemisphere, this one is in your blood.

The plot is simple enough. Young Odysseus, hero of the Trojan wars, is the captain of a fleet of ships trying to find their way home to Greece. All sorts of things go wrong. Sirens, a cyclops, gods and goddesses and monsters of every description, a giant whirlpool. Even if you’ve never read the original, you know the story.

As with any story written in another language, the translation makes all the difference. There are several free versions of The Odyssey available on Kindle, and you might try a few to see which one you like. And it might be entirely worth paying 99 cents for a more modern translation.

The Strange Case of Dr. Jekyll and Mr. Hyde

Here’s another one by Stevenson. What can I say, the guy is good. And once more, you know the story. But the original is still entertaining.

There are a few movies that I hadn’t seen for the longest time, like The Godfather or Apocalypse Now, but I knew them through their parodies, so that when I finally saw the original, I said, “Ah-hah! I get it!” This book is kind of like that.

Like I said, you know the basics. But there’s more to it than “Nice guy drinks potion and becomes evil.” It’s quite a complex and fascinating story that delves into serious questions about good, evil, and human nature.

Who doesn’t love The Three Musketeers? I don’t really have too much to say about this one, except that it’s a lot of fun.

Young d’Artagnan wants to be a musketeer. He travels to Paris, and through a series of misadventures manages to separately insult and be challenged to a duel by three of the greatest musketeers, Athos, Porthos, and Aramis. The musketeers are impressed by the young man’s pluck and his swordsmanship when they all end up fighting a common foe to avoid being arrested for duelling.

So, d’Artagnan becomes a musketeer. Adventures ensue.You’ve seen the story a hundred times in a hundred movies, but for a book published in 1844, it holds up remarkably well. It’s swashbuckling adventure at it’s finest.

Originally written in French, you might want to look around until you find a translation that works for you, but there are plenty of them to choose from.